It’s Lagos Fashion and Design week season again and this year it holds from October 25th to the 28th. A post on Instagram made me remember my first time and I thought it’d be an interesting story to tell. There were bad moments and good ones but generally I had a good time.

*This is going to quite a long post and I hope you stay till the end.

Due to school, I went only for the final day, I remember how excited and jittery I was as I was going alone. I left my house at about five o clock and took a cab to Federal Palace where Lagos Fashion and design week  was held last year. I got there at around 6pm and I was happy I came right on time. That was when the event was scheduled to start -little did I know, I was just deceiving myself. On getting there, there were so many photographers and people I had only seen on Instagram, my shy self refused to go and meet anyone. Though I got more comfortable when a photographer asked to take my picture and I was not just standing there awkwardly

This was my outfit last year – I never collected my pictures from the photographer because I didn’t know who he was!

After pictures and meeting some of my friends, we went to sit in the hotel lobby as we had been standing for a long long time. I and my friends wanted to take some pictures in front of a painting in the lobby and one of them brought out a camera. We were immediately approached by the security guard and told that only smartphone cameras were allowed. After piercing the man with our eyes, we switched the camera for a phone.

After a while, I looked at my watch it was already about 8 pm and I was scared the show had already started. I went outside and saw lots of people, still taking pictures, doing interviews and I was surprised. This was the time I was supposed to be getting home (as agreed with my mom) and the show had not even started yet.

To cut the long story short, I went back inside to sit with my friends and the next time we came out, everybody was inside. We just started laughing at ourselves. We knew it would be impossible to find seats and we were going to stand throughout. After we found our way in we stood until some people left their seats then we took over. During the show, there were some technical issues midway and the show had to pause. This took about 30 minutes if not more. I left by 12:30 am (The show wasn’t over) and you can imagine the trouble I was in at home.

So from my experience, these are some tips to help at Lagos Fashion and design week this year;

Yay! I’m glad you stayed till the end of my story. Have you ever attended Lagos Fashion and Design week? Let me know how your experience was like in the comment section. Also do you think you will be attending this years? 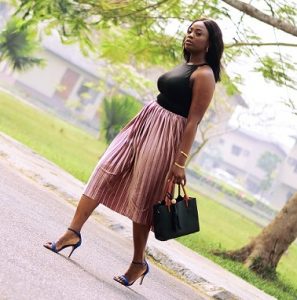